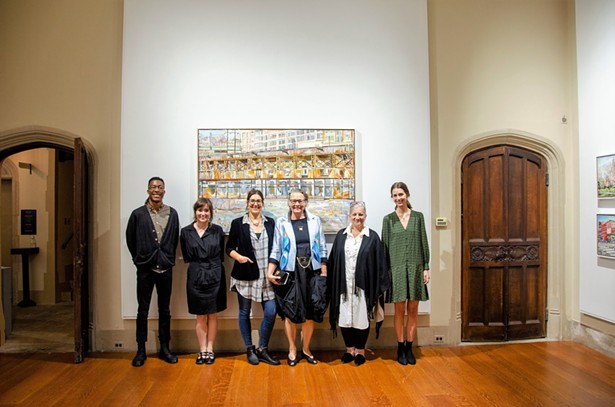 Looking at the oil paintings in the “Cityscapes: RVA” exhibit, it would be easy to assume that the colorful and bold depictions of Richmond neighborhoods are painted by a native.

In fact, artist Joanna Tyka is a graduate of the Academy of Fine Arts in Warsaw, Poland, who has lived and worked in Germany, Spain, and most recently in Miami. But in 2007, she was ready for a change of scenery that would allow her to discover the unknown.

“It was a spontaneous decision,” she explains, adding that while it wasn’t a question of blindly putting her finger on the map, she felt the same kind of excitement and anticipation. “Change is important for life and the creative process, as is the discovery of different lifestyles and a fresh new atmosphere.”

Like so many newcomers to Richmond, Tyka found herself captivated by the city and its relative lack of traffic congestion. It was not only finding a historic house with a garden near the river, it was also the proximity of her interests: the Bay, where she could satisfy her passion for sailing, mountains in two hours to be able to ski regularly , and a get to Washington, DC and the international culture that the capital has to offer. â€œIt’s the perfect place for an artist with a studio overlooking the garden, listening to birdsong and enjoying the beauty of the changing seasons,â€ she admits. “After 20 years in Miami, it was perfect.”

Tyka quickly realized how within walking distance the town was from her house and began to fall under her spell. â€œIt’s very charming, with a lot of history, a vibrant university with spirited young people, great museums and the beautiful James River,â€ she says. “The historic old architecture surrounded by nature immediately inspired me to create a series of new Richmond paintings.”

“Cityscapes: RVA”, currently at the Branch Museum of Architecture, showcases various historic parts of Richmond, albeit with a modern feel. So many of Richmond’s distinctive features – trains on bridges, views from the top of Church Hill, distinctive Jackson Ward storefronts, James River – are captured in its bold and signature style, colored by the sun and the seasons.

During his walks, the artist always brings a camera to be able to document a moment of perfect light, a seasonal effect or even a moment of the day. â€œI have an exceptional visual memory and I remember a moment that gave me a spark of joy and happiness seeing it,â€ she says. â€œI take a photo in my head and with my camera simultaneously, then I edit both, taking a lot of time to structure what I would like it to be and eventually starting the project on canvas or panel. drink. ”

Tyka is the first to admit that she is a slow painter who takes her time with details, contemplating subject matter, harmony, composition and colors. She makes a point of not repeating a point of view unless she has something more to say about it, such as another perspective. â€œEverything has to be in the right place and it takes time, and I don’t like to rush,â€ she says. â€œA lot of times I go back to a work of art, after weeks or years, to add and improve it. It’s like kids, you are constantly working on them.

After a long international career in art galleries and art publishing companies, Tyka took charge of her career in order to have personal contact with the people who bought her art. She explains: â€œThis interaction produces synergy with positive results for both the collector and me. It also gives me the flexibility to independently decide what I want to paint and when I want to change direction.

As a result, she has forged long-lasting and successful relationships by regularly displaying her cityscapes in Richmond at Bridget Beari Design, Corporate Museum and Frame and Urban Farmhouse in Shockoe Slip. With a nod to the 21st century, she also actively shows her work on social media, online galleries such as Saatchiart and her own website, tykaart.com.

Her goal with each work in the Cityscapes series is to express her fascination with the beauty of the architecture as well as the ambiance. â€œBut the time to create a Richmond cityscape is a time, and it will come to an end as well,â€ she said. â€œIt will end with a new adventure, the start of something new. Once I have nothing more to express or that does not bring me fulfillment, I end the series.

Don’t ask him when a painting is considered finished.

â€œI create one at a time until it’s ready. Completion takes my whole life. Finally, it takes love, passion, education and life experiences at all levels, â€she insists. â€œIt is necessary to create many unsold paintings to finally create a good one. ”

“Cityscapes: RVA”, runs until December 31 at the Branch Museum of Architecture and Design, 2501 Monument Ave. branchmuseum.org>